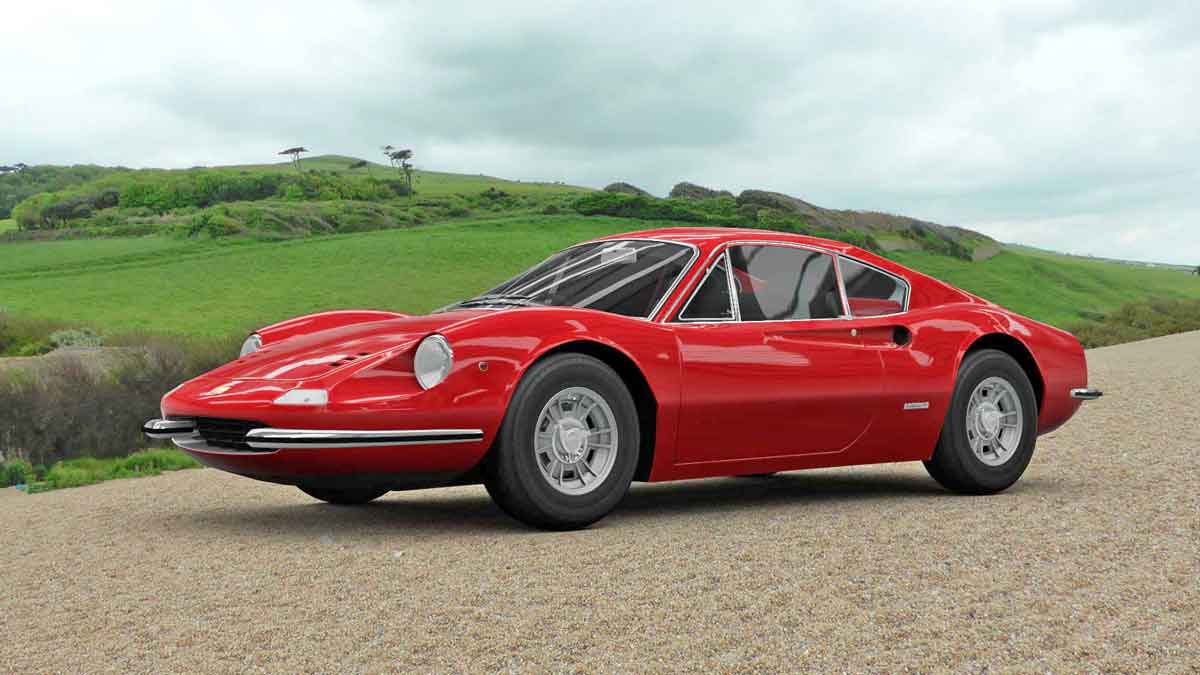 In 1969 things changed for ever at Ferrari. Fiat took their holdings in the company to 50 percent and effectively controlled it from then on. Enzo Ferrari still ran the racing team but by 1971 he had given up his role of managing director of the road car division. There was a new atmosphere.

Enzo Ferrari had always been a racing man pure and simple. In comparison, the Fiat board were more like accountants first and engineers afterwards; their priority was to show a profit. Selling small numbers of very expensive cars was a route which had driven many other car manufacturers to bankruptcy and Fiat were not going to fall into the same trap. How could they go downmarket however without damaging the Ferrari brand?

The answer was the Dino. The name was in memory of Enzo’s son Alfredo, who was credited with creating the six litre engine; this was perhaps not really the case since, suffering from muscular dystrophy, he died before the Engine was built although he did discuss technical details with Ferrari engineers from his hospital bed.

Although early Dinos were built by Ferrari they didn’t carry the Ferrari name because Enzo did not want to detract from the prestige of his much more expensive 12 cylinder cars. after Ferrari was taken over by Fiat the new owners carried on the tradition; but although strictly speaking cars like the Dino 246 GT were not supposed to be Ferrari’s at all, they were still commonly called ‘Ferrari Dinos’.

The 246 GT was introduced in 1969 and like it’s lower powered predecessor, the 206 GT, it was a mid-engined sports car but in this case the engine was a 192 brake horsepower V6 of 2419 cc. Whereas Ferrari would probably have been built of aluminium, fibreglass and carbon fibre this car was built of steel; a lot cheaper of course and a lot heavier too. However performance didn’t really suffer all that much; it could still hit 146 mph and go from nought to 60 in just a whisper over seven seconds. Available as a sports coupe or a semi convertible, it had racing car type handling as a consequence of the better weight distribution made possible by mounting the engine amidships.

In order to comply with American emission regulations cars that were sold in the USA had to be detuned and power output dropped to 175 brake horsepower.

Not only was it popularly called a Ferrari, it was desined by Ferrari's favourite desiners Piminfarina and built at Ferrari’s factory at Modena, where apart from a facility for building cars the company have a track for testing their road and racing cars. Advertising copy however merely claimed that it was 'almost a Ferrari'!

The 246 GT was not only a very attractive sports car but a very popular one too. Several of them were even owned by Formula One racing drivers, including Peter Gethin, a Ferrari driver who took the winners podium at the Italian Grand Prix in 1971.