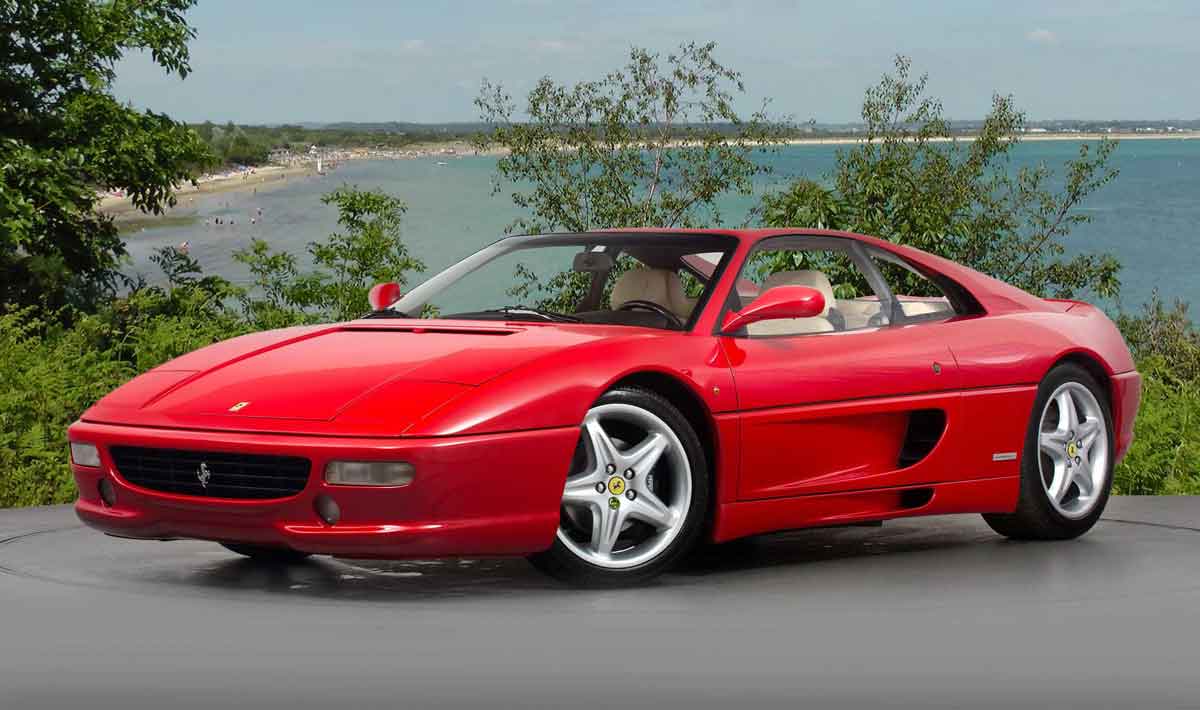 The F40 had been a very profitable car for Ferrari, but that had been because so many people bought one for either investment or to race. Yes it was street legal but only just and it was completely impractical to drive one in heavy traffic. Plus, where in the world can you legally go to 200 mph on a public highway?

A compromise was possible. Perhaps the car with incredible performance but good manners on the street, which could realistically be used on a day-to-day basis, for a driver and perhaps a single passenger? The F355, which became available in 1994, was Ferrari’s answer.

A well mannered streetcar does not need a huge engine. It certainly does not need a blower. However, the more cylinders the car has, usually, the smoother it runs. The company decided that a V8 was the right type of engine to use since a V12 would be overkill. This engine though not only had titanium con rods but also five valves per cylinder, three intake valves and two exhaust, which the engineers found gave it the maximum efficiency, allowing a higher compression ratio of 11:1, more efficient fuel burning and higher rpm.

The beautiful Pininfarina designed body was subjected to extensive windtunnel tests to find the maximum efficiency and an underbody tray was fitted to give maximum downforce to ensure limpet -like adhesion to the road. Because of the smaller engine and more efficient cooling the air intakes were smaller and so the side strakes which had (to many tastes, at least) disfigured the Testarossa were not necessary.

The inside of the car was far more luxurious than the F40 but hardly limousine standard! Copious use was made of leather; not only the seats were leather covered but also most of the dash, the door panels, even a little storage box between the seats. It even had air con of a sort. Suspension could be adjusted from normal mode to a stiffer sports mode just by the flick of a switch.

At launch a Berlinetta (coupe) was available followed later by a convertible and then a Targa (detachable) top version; although the original Berlinetta is usually viewed as the more attractive.

Performance was still first-class, whilst not being stratospheric. The 3.5 litre V8 rear mid-mounted engine was capable of 375 brake horse power which gave a top speed of 185 mph and acceleration of nought to 60 in 4.6 seconds. Perhaps more importantly though it was reasonably docile in traffic and rearward visibility, although it could be better, was just about adequate.

The initial transmission choice was a six speed automatic gearbox but by 1997 an F1-styled system operated by paddles was introduced; this gave faster gear changes but was not universally popular and the slick manual versions outsold this version by about 4 to one.

The F 355 became one of the most successfully selling cars in Ferrari’s history; but it wasn’t perfect. Like the F40, it was necessary for the engine to come out every three years for drive belts to be replaced. The car had extractor manifolds that increase performance by adjusting the pressure of exhaust gasses and removing them efficiently but they are known to fail and can make a complete engine rebuild necessary. Valve guides wear out rapidly and they are not cheap. In 2009 Ferrari was forced to recall more than 2000 F355s in the United States when they were sued by an owner who was injured in a fire caused by an improperly fitted fuel supply clamp.

To sum up; Ferrari created a beautiful sports car that was practical to use and fun to drive. However it was also very complex and expensive to both service and repair. None of these problems however prevented them from selling more than 11,000 F355s.