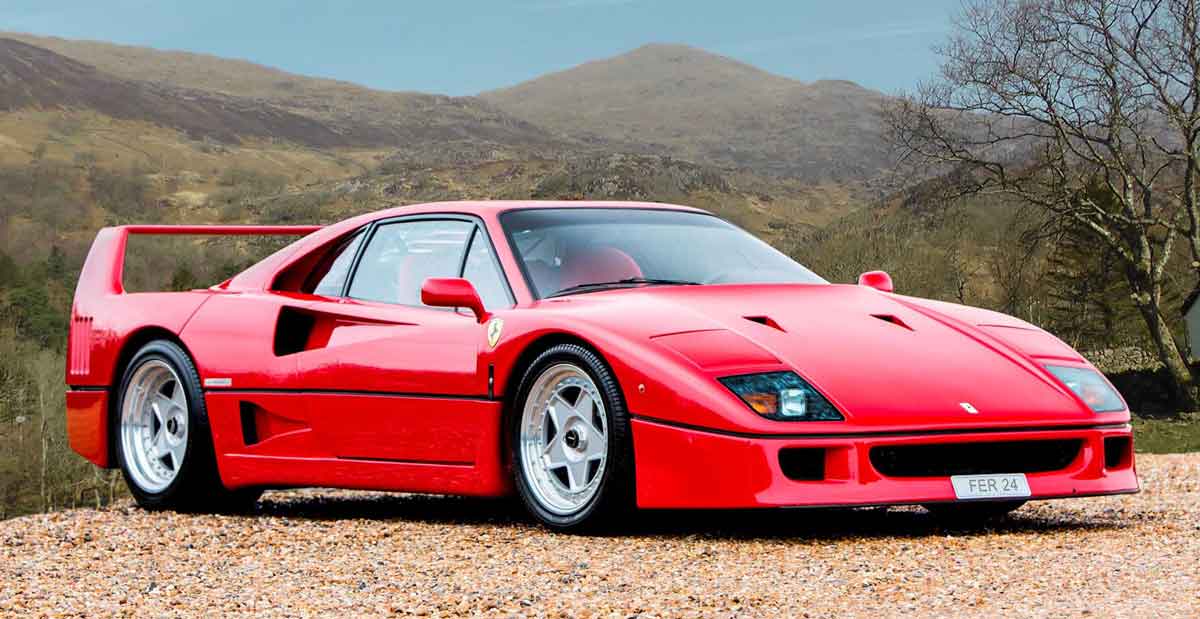 Enzo Ferrari died in 1988 at the grand old age of 90. it was entirely fitting that the last car that he was responsible for was the F 40; a supercar described by no less than arch critic Jeremy Clarkson of Top Gear as the best car in the world, ever. Enzo had instructed his team to create nothing less, and they succeeded.

Enzo had detected that a lot of his traditional customers felt that Ferrari were becoming too soft. He wanted to go right back to his roots and produce a car that was admittedly spartan but which offered buyers sheer performance. Pininfarina were given the job of designing a car which was the nearest thing to a racing car which could be legally driven on the road.

Perfection is expensive. Initially the car was expected to sell at £177,000 but by the time it was actually ready for production this had rocketed to about £250,000. In 1987, when orders were being taken for it, this was serious money and Ferrari only expected to sell a couple of hundred or so. In fact more than 1300 was sold, making the F 40 the most profitable car the company had ever made.

What did customers get for their money? Well comfort and luxury were bottom of the requirement list. If the car was to be fast it had to be light as well; this was achieved with a body made from aluminium, Kevlar, and carbon fibre. glass was considered to be too heavy so polycarbonate plastic was used for windows and windshield. There was no music or other type of entertainment system, glove box, carpets, leather trim, even door handles, and the first 50 cars manufactured even had sliding windows although later models had the luxury of windup ones.

luggage space? None. Ease of getting in and out? One mark out of 10. Airbags? None. Even the paint was as thin as possible to save weight. rear vision? Practically non-existent. Driving it in heavy traffic would have been a nerve wracking experience since every attempt to pull out would have been a major operation. Some testers described it as a car that gave an experience of mixed excitement and sheer terror, suitable for driving for only 30 minutes, after which a calming cool drink and a nap was recommended!

Power was provided through a 2.9 litre rear mid-mounted V8 engine with twin superchargers. The maximum power output was 471 brake horse power which could propel this vehicle to just a fraction over 200 mph and nought to 60 in 3.6 seconds. Overtaking in it was a dream; it would kick from 40 mph to 70 mph in just two seconds. Power like this needed very special tyres, which were designed specifically for this car by Pirelli.

To be realistic a car like this was not what you wanted to buy in order to take the kids to school and do a bit of shopping. A high proportion of the buyers were either speculators who wanted to put them to one side to see if they appreciated in value (they did!) and privateers who wanted to race them. It was actually estimated that only 10 percent of buyers actually intended to ever put their cars on a public highway!

By 1992 when it was discontinued, this total throwback to a bygone age of Ferrari was a fitting epitaph for Enzio.