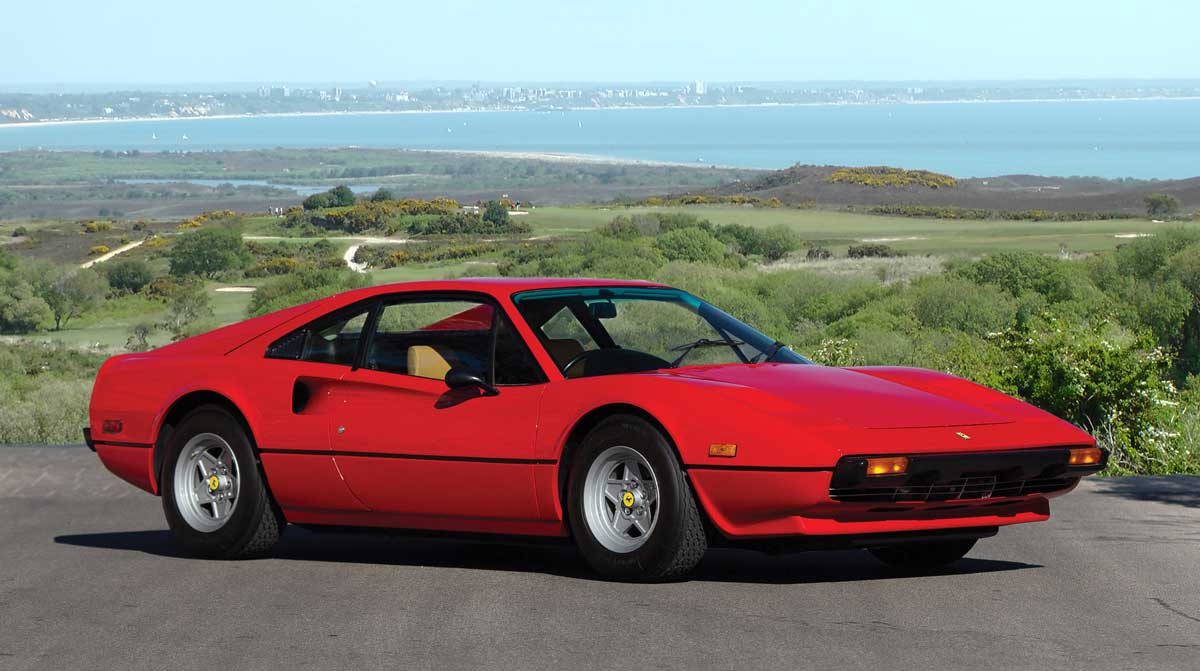 Although Ferrari had experienced handling problems with the earlier Boxers with their mid-mounted engines they stayed with the concept and managed to tame some of the more dramatic drawbacks to this configuration. They were so successful that the 308 GTB, another mid-engine car, was their most commercially successful to date with sales in excess of 20,000 over the production run between 1975 and 1985 making it one of the best selling Ferraris ever.

Designed by Pininfarina the Berlinetta (ie sports coupe) 308 GTB and the Targa (detachable hardtop) were launched in 1975 with tube frames and separate bodies. A vinyl cover was provided the GTS to keep the roof panel in whilst it was detached, and this could be stowed behind the seats. Another mode, the 308GT4 was a 2+2 with a longer wheelbase and bodywork by Bertone. The engine was a 2.9 litre V8 producing 252 bhp but versions destined for the American market had to be detuned to 237 brake horse power in order to comply with emission regulations.

Initially the body panels were made of fibreglass which helped to keep the weight of the car low but from 1977 this was replaced by steel. this was perhaps not the best decision ever; not only was the weight of the car increased, blunting performance slightly, but also the steel available in Italy at the time was of poor quality, much of it coming from Russia as a result of a barter deal. Very little seems to have been done by any Italian manufacturers around the time to protect against corrosion and so rust was a serious problem in those days for just about the entire Italian car industry.

The two seater GTB was a direct replacement for the Dino 246; it was said to have been designed by Leonardo Fioravanti who had already designed many of the company’s finest cars including the Daytona, Dino and Boxer.

European specification cars could reach 154 mph with nought to 60 in 6.7 seconds. Thanks to the extra weight and engine changes made necessary by American legislation cars that were sent to the USA had an inferior performance but this didn’t seem to prevent the 308 from becoming the best loved Ferrari in the USA!

Yes it was, well, not so much cheaper, but let us say less expensive than the rest of the Ferrari stable, and this could have something to do with it. However another possible reason for it's popularity was that in a very popular TV series in America called Magnum, P.I a cop called Thomas Magnum drove around in one; several actually because they were changed every series, and there were eight series in all! This must’ve been a very expensive advertising stunt for Ferrari but it certainly paid off and it was good for the TV company as well, because each Ferrari they were given was auctioned off at the end of the series; usually fetching a lot more than a ‘normal’ 308 because of it’s history.